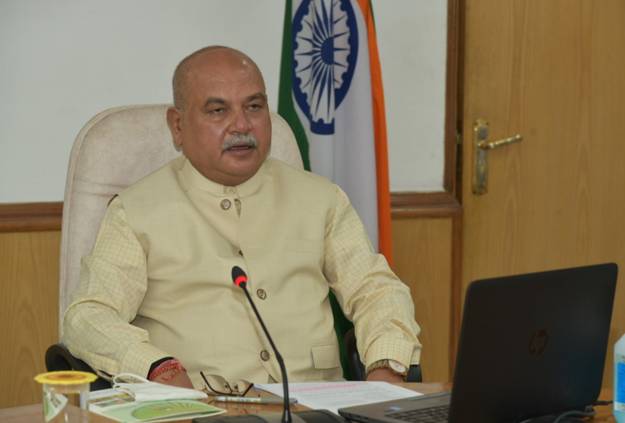 The Seed Minikit Programme was launched by Union Agriculture Minster   Narendra Singh Tomar today by distributing Seed Minikits (higher yielding varieties of seeds) to farmers. Addressing the farmers, Union Agriculture Minister mentioned that the Central government in collaboration with states has been implementing various activities to enhance production and productivity of pulses and oilseeds under the National Food Security Mission. From the year 2014-15, there has been a renewed focus on increasing the production of pulses and oilseeds. The efforts have yielded good results. Oilseeds production has increased from 27.51 million tonnes  in 2014-15 to 36.57  million tonnes in 2020-21 ( 3rd  advance estimates), while pulses production has increased from 17.15 million tonnes in 2014-15 to 25.56 million tonnes in 2020-21 ( 3rdadvance estimates He stated that though  trends in area, production and productivity of oilseeds and pulses are encouraging,  but these need further acceleration.  He mentioned that the Seed Minikits programme is a major tool for introducing new varieties of seeds in the farmers fields and is instrumental for increasing the seed replacement rate.

The mini kits are being provided by the Central Agencies National Seeds Corporation (NCS), NAFED and Gujarat State Seeds Corporation and wholly funded by the Government of India through the National Food Security Mission.  The conversation with the farmers revealed their awareness about the programme and the benefits of the mini kits which they promised to share with fellow farmers. The farmers also appreciated the role played by the state agriculture officers and the extension being done by the Krishi Vigyan Kendras. The distribution of seeds will continue till 15th June 2021 so that the seeds reach the farmers before the Kharif sowing  commences.

20,27,318 Seed Minikits of pulses, about 10 times more than last year, and more than 8 lakh Soybean seed mini kits and 74 thousand Groundnut mini kits are to be provided free of cost directly to the farmers under the National Food Security Mission alongwith  free distribution of soybean seeds for intercropping and in high potential districts  in 41 and 73  districts  respectively.

India is making tremendous progress in the agriculture sector and country is estimated to produce a record 305.43 million tonnes during 2020-21. In addition to meeting domestic needs, India also earns a lot from export and maintains a positive trade.

The Government’s priority is on increasing production of pulses and oilseeds. The formulated strategies are to increase production through area expansion, productivity through HYVs, MSP support and procurement. Experience in the Mustard Mission of Rabi 2020-21of only selected varieties having yield potential more than 20 quintals per hectare resulted in 13% increase in productivity and 14% in production from almost the same area.