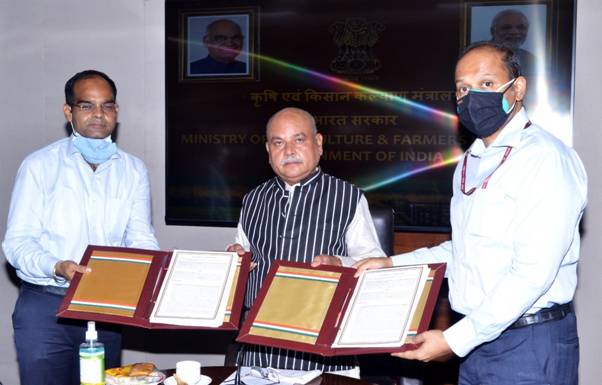 Digital ecosystem of Agriculture with farmers at the centre

Ministry of Agriculture and Farmers Welfare has taken concrete steps for digitization of agriculture sector. 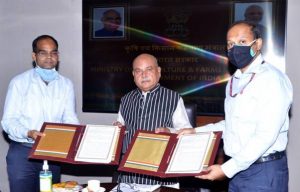 Prime Minister   Narendra Modi’s determination has invigorated the farming sector and a number of schemes including the historic Prime Minister Kisan Samman Nidhi (PM-Kisan) worth Rs.75,000 crore per annum are being implemented transparently to increase the income of farmers. This was stated by the Union Minister, Shri Tomar during the MoU signing ceremony of the Ministry of Agriculture and Farmers Welfare with four institutions.

These institutions are: (i) Patanjali Organic Research Institute (ii), Amazon Web Services (AWS) (iii), ESRI India Pvt. Ltd. (iv) Agribazar India Pvt. Ltd. The MoUs have been signed with these organizations for pilot project using Kisan Database as adhaar within a period of one year: With ESRI for setting up and launching of “National Agriculture Geo Hub”, with Amazon Web Services for creation of digital services and innovation ecosystem linked with digital agriculture in the agricultural value chain, with Agribazar to collaborate with Department of Agriculture for pilot project in 3 States (Uttar Pradesh, Madhya Pradesh, Rajasthan) to promote digital agriculture and an MoU has been signed with Patanjali for agricultural management and farmer service in 3 districts (Haridwar- Uttarakhand, Hamirpur- Uttar Pradesh and Moraina- Madhya Pradesh).

The Ministry of Agriculture and Farmers Welfare had constituted a Task Force and a Working Group of Experts and Technology Experts in the field to prepare a roadmap for digital agriculture.

The Task Force, under the Chairmanship of   Sanjay Agarwal, Secretary, Ministry of Agriculture and Farmers Welfare and Co-Chairmanship of  J Satyanarayana, former Secretary, Ministry of Electronics and Information Technology, Government of India has prepared a Consultation Paper on India Ecosystem Architecture (IndEA) Digital Ecosystem of Agriculture (IDEA) with a view to keep farmers at the centre of agro-ecology by promoting free digital technologies.

The Minister of Agriculture, Tomar also unveiled the document for the comments of agriculture experts, farmers, IT experts and general public. Its final document will guide for the digital agriculture sector in the coming years.

Recognizing the importance of digitization in agriculture, the department is preparing a centralised farmers database and formulating various services based on it in order to create a digital ecosystem for agriculture. This database will be linked with the land records of farmers across the country and unique farmer IDs will be generated. Under an integrated database for farmers, information related to all benefits and assistances provided through various schemes of the central and state governments can be kept at one place and it can be a source of information for providing benefits to the farmers in future. A database with the details of about 5 crore farmers has been prepared so far. It is expected that the database will soon be completed by incorporating the details of all landholding farmers into it. The available data related to PM Kisan, Soil Health Card and PM Crop Insurance Scheme have already been integrated. The process of collating data from other databases of the Ministry of Agriculture as well as the Ministries of Fertilizers, Food and Public Distribution is in progress.

Various kind of support will be received from the database including IDEA and solutions based on it through the case based use developed with help of these pilot projects, some of which are as follows: Farmers will be able to make informed decisions about which crop to grow, what type of seed to use, when to sow and what best practices to adopt to maximize yield. Those involved in the agricultural supply chain can plan their procurement and logistics with accurate and timely information. An accurate and smart farming can be possible by getting proper information at the right time. Farmers can decide whether they have to sell or store their produce, and further when, where and at what price they have to sell it. In the process, farmers get benefitted from innovative solutions and individual-specific services powered by emerging technologies which protect their privacy.

Tomar said that the government is proceeding fast on an ideal path of improving farmers’ lives by increasing their income. The government has identified technology as a priority sector and has made provisions for utilising new digital technologies in the agriculture sector. Agriculture and rural economy are the basic foundation of India and they have the potential of overcoming the toughest situations and emerging victorious. These areas have proved their relevance even during current Covid situations. Farmers have produced more than before, which is expected to improve even further. Summer sowing has also increased by 21 percent.